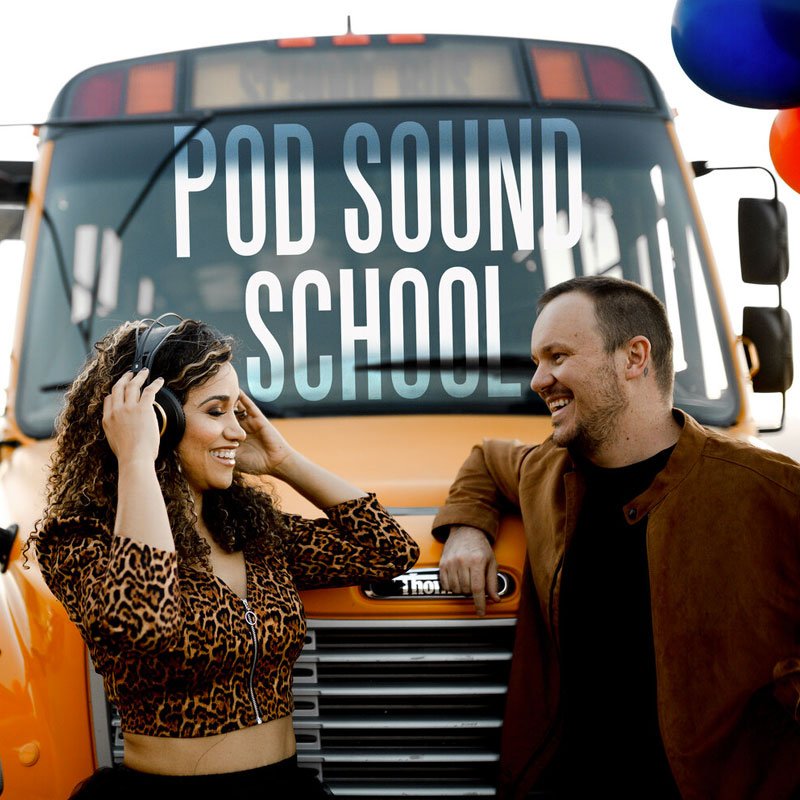 For years, Veronica didn’t think she was creative.

As an attorney, she found herself doing a lot of copying and pasting, tweaking the same legal documents day after day. But when she and her husband Steve started exploring the world of podcasting, he quickly identified her as the creative brain in the duo.

“In the process of growing Pod Sound School, [I found] I have this creative person contained inside me and now I just love the creative process,” she says on an episode of Between 2 Mics.

Today, Veronica and Steve have built Pod Sound School into a hub for fellow podcasters, featuring both free resources and paid services through Pod Sound School University. One of their superpowers? Helping clients discover the creativity within, just as Steve did for Veronica.

“It’s about really awakening to the creative person you are and getting into that message,” Steve says.

Keep reading for more of their expert insights on how to thrive in podcasting…and have a lot of fun along the way.

Veronica and Steve gauge their success on a unique metric.

“We kind of stop every now and then and we’re like, ‘Are we having fun?’” Steve says. “That’s our guiding force. If it stops being fun, then time seems to speed up or slow down. And then things stop working.”

The logic behind the Pod Sound School team’s commitment to fun, however, is about more than the fact that it’s just, well, fun. It’s rooted in the connection between fun and creativity.

“That’s sort of what we think the key ingredient is — fun,” Steve says. “We feel like if you’re having fun, then you’re going to make really good content.”

Flaunt what’s funky about you

Pod Sound School offers services for podcasters who need help with all of the basics of launching a show. And since Veronica and Steve thrive on drawing out the creativity in their clients, the launch process often involves helping people get clear on the direction of their podcast.

In a world full of so many podcasts, this can feel a little overwhelming.

For Steve, picking a lane for your podcast is as simple as figuring out your own special brand of weird. “Find that thing that makes you uniquely you — like the weirdest or the most peculiar or the most sexy thing about you — and make that really shine,” he says.

Don’t be afraid to experiment

Veronica and Steve are no strangers to trying new things when it comes to their business. Pod Sound School started with coaching podcasters on audio only and has since expanded to the entire creative process. They’ve also added a YouTube channel chock full of podcasting resources to their marketing arsenal.

Steve’s background in sound and film has given them a leg up in figuring out these multiple iterations of their biz, but a healthy dose of fearlessness has also played a part.

“We throw ourselves as guinea pigs into the water,” Steve laughs, recalling his own journey from camera-shy film school grad to YouTuber.

Veronica chalks up their successful evolution to a lot of “trial and error.”

While Steve and Veronica place a high premium on fun, they also feel strongly that podcasters need to remain focused on what their audiences want. This has remained a driving force for them.

If your primary goal in starting a podcast is to get attention, she continues, you’re more likely to crash and burn.

While building Pod Sound School together, this tag team has learned about the importance of balance. Since they also happen to be married, they’ve had to figure out how to balance the personal and professional aspects of their relationship.

Yep. Balance is pretty much the name of the game — and it’s something that all podcasters can learn from. If you’re struggling to strike the right balance with your own pod, you might consider bringing on a co-host.

“It’s cool to have the left brain and the right brain,” Steve says of his working relationship with his wife. “That’s why I think it’s nice to have a co-host. Do you want to go solo? Or do you want to have a co-host that’s really going to kind of help even you out and pull you back when you get too creative or remind you that [something’s] not appropriate for your audience?”

If Veronica and Steve’s journey is any indication, the best answer to this question might be based on what sounds like the most fun.

For more tips on how to balance the technical and creative sides of podcasting, listen to this episode of Between 2 Mics. Be sure to subscribe to get future episodes directly in your preferred podcast player.

Vincent Moreno Jr. is an Audio Engineer, head of SquadCast Support, and avid BBQ’er. He aims to make sure Podcasters can create content smoothly while sounding crystal clear with ease.